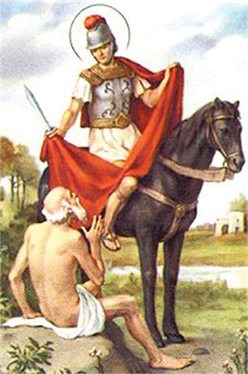 St Martin was born in 316 AD, in Savaria in Pannonia (present day Hungary) but he grew up in Italy where his father was a Roman officer. As was his duty as an officer’s son, Martin joined the Roman army at the age of 15. He served in Amiens in France, in the Guard of Emperor Konstantin I. He is said to have always shown great kindness and generosity towards the poor, sharing whatever little he had with people in need.

It was in these days that the most famous story about St Martin occurred: on a cold winter’s night, Martin was riding towards the gates of Amiens when he encountered a beggar, who was barely clothed and close to death. Nobody had stopped to help, but Martin halted his horse, took his sword and cut his warm military cloak in half giving one half to the beggar (as a soldier he only owned half of his uniform). Legend has it that Jesus Christ appeared to Martin in his dream that night, thanking him for his good deed and revealing that the beggar had been he himself. After this, Martin decided to change his life. He was baptised at the age of 18 and felt increasingly in conflict between his duties as a Roman soldier and his faith. On one occasion he refused to fight, instead proceeding to stand right between the two frontiers, which is said to have stopped the battle altogether. Eventually, he left the army and went to Pointiers, to become a pupil of Bishop Hilarius and a monk. 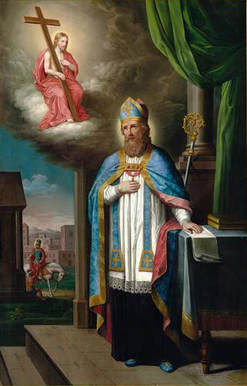 As a monk, Martin continued to help and stand up for the poor whilst leading a simple and modest life. Because he was always kind and helpful, he became famous and very popular with the people. When the Bishop of Tours died in 371, the people wanted Martin to become his successor, but Martin wanted to continue his modest life as monk. Legend has it that he tried to hide from the people in a goose pen, but the excited geese betrayed the intruder with their honking, so he was found and made bishop. The traditional goose roast on the feast of Martin is often seen as Martin’s revenge for the betrayal. However, this tradition is likely to originate in the agricultural year cycle, when geese were used as currency to pay tax to landowners or pay off farm workers, which was practical as it avoided having to feed too many of the animals during the winter.

Having accepted his task, Martin continued to support and stand up for the poor, underprivileged and prisoners, showing a strong sense of justice and great courage, even against royal authority. Legend has it that he even performed healings and other wondrous acts. When he died after 30 years in office, huge crowds attended his funeral on 11 November 397.

Lantern processions by his grave could be a possible origin for the lantern walks today. Other sources suggest that the tradition is based on an incident where Martin lost his donkey and children helped find the animal in the dark with their lanterns. A likely connection seems the mingling of pagan and agricultural customs with the commemoration of Martin, as the time of his death is close to the end of harvest time, when fires were lit in the fields to celebrate the year’s yield and, as part of these celebrations, children started walking round their communities with lanterns made from pumpkins and turnips, asking for fruit and baked treats. Nowadays, the lantern processions are often led by a “Martinsmann” on horseback and end with a bonfire, with the famous cloak sharing story enacted by its side. 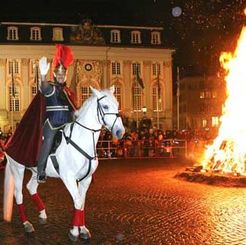 ​Martin’s spiritual influence spread across Europe and through the widespread veneration, he was soon considered a saint. Today, the tradition to commemorate St Martin for his kindness and humanity is still alive in parts of Europe, particularly in Germany and Austria but also in Belgium, the Netherlands, Portugal and Malta.
​
St Martin is the patron saint of France (as well as of several regions and towns across Europe), and, deriving from the stories about him, the patron saint of beggars, soldiers, geese (and pets generally), tailors and wool-weavers (because he shared his cloak), and other trades such as innkeepers and vintners (since his feast coincides with the late grape harvest).